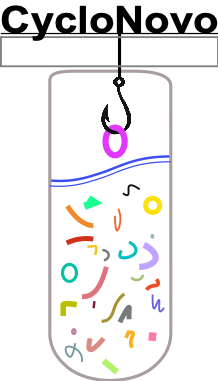 We typically think about antibiotics as drugs that our doctors prescribe. But they are actually molecular bullets that bacteria use to kill each other – humans merely borrowed and adapted these bioactive compounds to fight infections. Since many bacteria produce bioactive compounds the question arises whether ≈1000 bacterial species inhabiting our gut also produce antibiotics. If yes, does the continuous exposure to these antibiotics lead to the development of antibiotic resistance in the human microbiome?

Today, little is known about antibiotics that are produced by bacteria that live in the human gut (rather than doctor-prescribed). One of the reasons for this gap in knowledge is that antibiotics often evade experimental and computational detection methods.

Scientists at the University of California San Diego have started closing this gap by developing a new algorithm for analyzing cyclopeptides, bioactive compounds that include many antibiotics (like daptomycin shown in Figure below), anticancer drugs (like echinomycin), and immunosuppressors (like cyclosporin A).

The cyclic structure of cyclopeptides is both a blessing and a curse: it gives them favorable properties similar to therapeutic drugs but, at the same time, makes it difficult to develop algorithms for their analysis. However, recent advances in mass spectrometry (MS) and bioinformatics provided new ways to decode cyclopeptides. Just in the past few years the Global Natural Product Social (GNPS) molecular network, developed at the University of California San Diego, accumulated millions of mass spectra representing many compounds from different organisms and environments, creating a digital “gold mine” for finding new cyclopeptides. However, identifying mass spectra that represent cyclopeptides (and inferring sequences of their amino acids) is not unlike finding a needle in a haystack.

A paper in Cell Systems by leading co-authors Dr. Pavel Pevzner and his graduate student, Bahar Behsaz, alongside collaborators from around the world, presents the new CycloNovo algorithm that identifies cyclopeptide spectra in a haystack of all peptides (a vast majority of peptides are linear) and decodes them by analyzing large MS datasets. Mass spectrometers are automated molecular weight-scales that measure masses of tiny compounds and shatter them into small fragments to then report the masses of the resulting fragments. CycloNovo decodes this cryptic information about the shattered fragments to find amino acid sequences of cyclopeptides that were previously sitting in the dark, waiting to be discovered. After a decade where this problem had remained open, the team developed an algorithm for solving it that is not unlike algorithms for genome assembly, finding sequences of nucleotides in a genome.

In the last 75 years since the cyclopeptide Gramicidin S was used as the first antibiotics to treat wounded soldiers in 1943, only ≈1,200 cyclopeptides have been sequenced as a result of painstaking effort that often spans years to discover a single compound. In contrast, the paper reported over 400 new cyclopeptides in microbial and plant datasets (some plants also produce cyclopeptides) by a push of a button and further validated some of them using complementary technologies. One of the datasets was generated from stool samples collected over a period of many years by co-author Dr. Larry Smarr. The analysis surprised them since it showed many cyclopeptides produced by flaxseeds (rather than by microbes in the human gut), making them question its validity. However, as it turned out, Dr. Smarr had in fact been using flaxseed oil in his diet exactly at the time when the stool samples featuring flaxseed cyclopeptides were generated. “This is the first demonstration that cyclopeptides from food remain stable in a harsh environment of the human gut and are not degraded. Our study suggests that cyclopeptides are responsible for recently demonstrated antimicrobial activities of flaxseed. What is remarkable is that flaxseed cyclopeptides represented just one of 65 other cyclopeptides found in these gut samples, raising the question of how these cyclopeptides might affect the human microbiome and whether they trigger resistance.” explains Behsaz.

As large MS datasets from bacteria and plants are becoming available, methods like CycloNovo are essential for interpolating valuable information from them. A scientist can now generate mass spectra from samples collected in the Amazonian jungle and rapidly search this dataset to see if there are any cyclopeptides in those samples with the push of a button. The found cyclopeptides can be further screened for antibiotic and other biomedically important activities.

The observations from this paper beg the question of if and how these potentially antibiotic compounds are interacting with the microbes in one’s gut. The team is already working on a pipeline that integrates the information provided by CycloNovo with other predictions from microbiome data to find cyclopeptides. CycloNovo’s ability to find cyclopeptides makes it applicable to early drug investigations laboratories and pharmaceutical companies.

This work was funded mainly by the UC San Diego Center for Microbiome Innovation Grand Challenges Award. Drs. Pevzner, Smarr, and Dorrestein are all members of the CMI. Bahar Behsaz was a CMI graduate fellow in Microbial Sciences in 2018. Drs. Hosein Mohimani from Carnegie Mellon University, Alexey Gurevich and Andrey Prjibelski from St. Petersburg State University in Russia, and Dr. Joshua Mylne and his graduate student, Mark Fisher, at the University of Western Australia were also collaborators on this project.

The Proof is in the Poop
November 4, 2021
Recent New Releases
CMI in the Media
Media Contact
Brittanie Collinsworth