Since the early days of the pandemic, wastewater has played a vital role in the fight against SARS-CoV-2. While the virus primarily attacks the respiratory system, it replicates in the gastrointestinal tract, travels into stool, and eventually reaches sewage systems. This knowledge allowed researchers to devise a wastewater surveillance system that detects presymptomatic and asymptomatic cases, which has proven both critical and effective in mitigating the virus’s spread.

However, detection is only the first step. Although the virus primarily spreads via airborne transmission, the gastrointestinal tract is a less common vector of infection. Since the virus can survive in wastewater for several days, the potential for fecal-oral transmission is non-trivial. This especially holds true for developing countries where both viral surveillance and water sanitation can present significant challenges.

To address the need for more rapid and effective methods of water purification, a group of researchers from the Department of NanoEngineering and Chemical Engineering at the University of California San Diego (UC San Diego) studied the efficacy of using algae-based microrobots. The team, led by Fangyu Zhang, Zhengxing Li, Liangfang Zhang, and Joseph Wang, recently published their findings in the Journal of the American Chemical Society in an article entitled “ACE2 Receptor-Modified Algae-Based Microrobot for Removal of SARS-CoV-2 in Wastewater.”

Microrobots have been used for water purification before, but their utility has been limited by short lifespans or the necessity of toxic fuels. However, the decision to create a biohybrid microrobot using algae as a platform bypasses these limitations. Using Chlamydomonas reinhardtii as a base, the team then anchored an angiotensin-converting enzyme 2 (ACE2) receptor, which is responsible for recognizing and binding to the target virus.

In an experimental environment with SARS-CoV-2 spike protein (S protein) and pseudovirus as model contaminants, the microrobot was able to remove 95% of the S protein and 89% of the pseudovirus. These results show considerable promise compared to traditional wastewater treatment options for viral contaminants, and applied usage is expected to be even more efficient, as open wastewater environments will allow the algae platform both greater mobility and a longer lifespan.

While the technology is still in its infancy, the possibility for more efficient on-the-fly water purification is incredibly promising. The team is looking forward to further refining the concept and exploring the potential for other environmental remediation applications.

The Center for Microbiome Innovation is proud to include Joseph Wang as a faculty member. 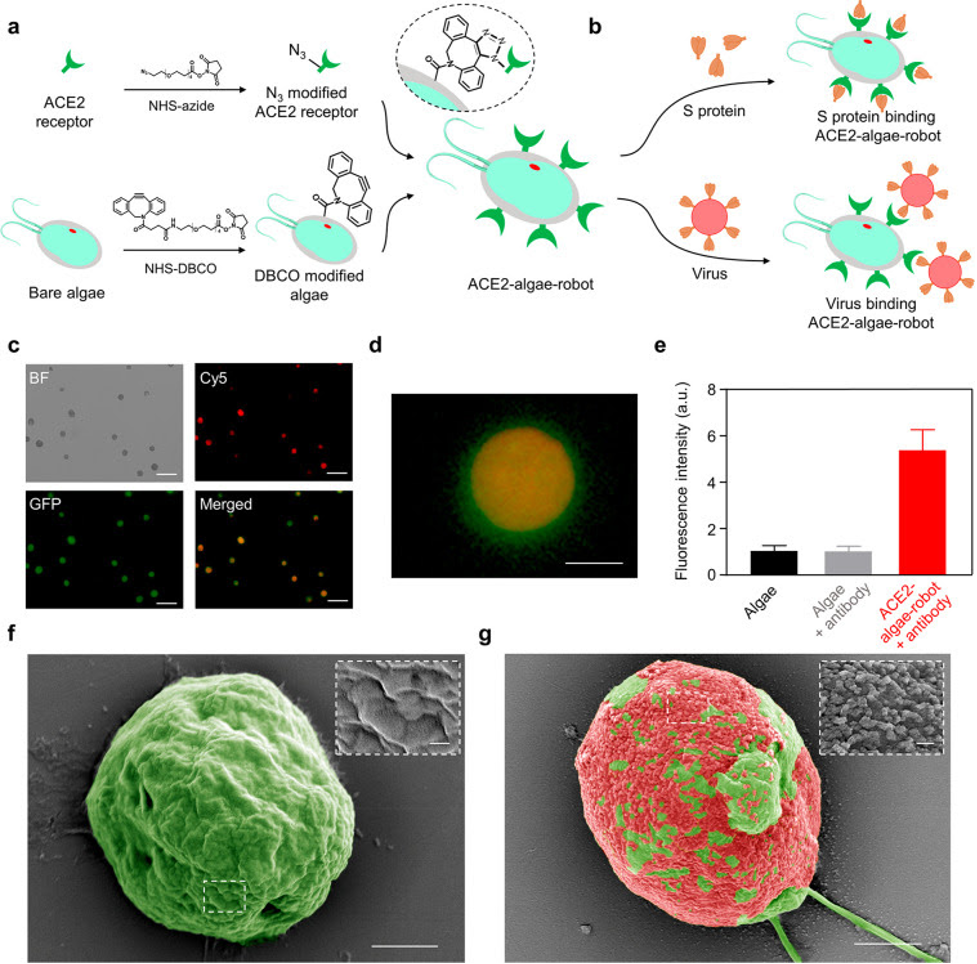